An important new finding, first reported by the CAIS of London (hosted by Shapur Suren-Pahlav), has surfaced in Nakhchevan in the Caucasus. This pertains to a joint archaeologicl expedition conducted by the Republic of Azarbaijan (ROK) and the US. The ROK team was organised by the Republic’s Institute of History, Archaeology and Ethnography of the Nakhchivan Department of the National Academy of Science of Azerbaijan; the ROK team was led by Professor Veli Bakhshaliyev. The US team was composed of archaeologists from Pennsylvania University. The head of the Pennsylvania University  expedition was Professor Lauren Ristvit. 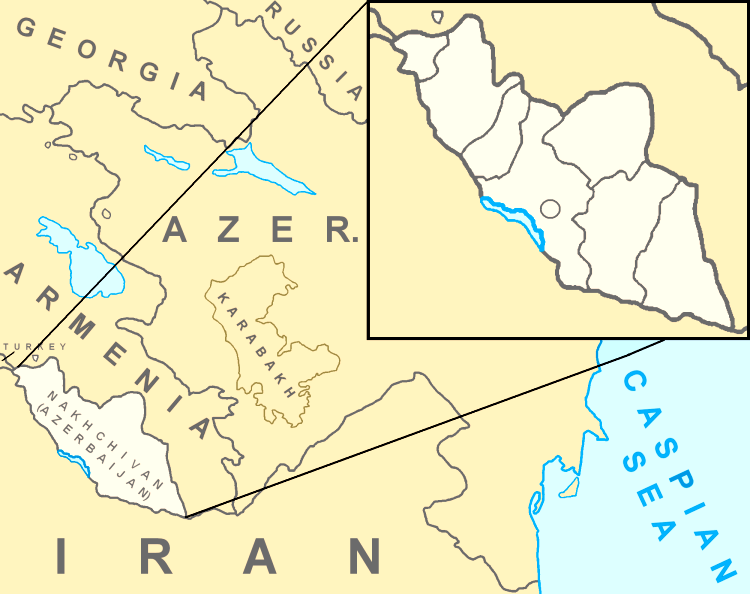 Location of Nakhchevan (from the website of CAIS, hosted by Shapur Suren-Pahlav).

The team has found archaeological remains in the Oglangala city fortress in the Sharur region of Nakhchevan that date to the Median era (728-550 BC) of ancient Iran. See also report on the website of The Naxcivan Archaeological Project-University of Pennsylvania.

The expedition found the following: Layout of the Nachchivan archaeological digs in 2006-2008 (picture source: The Naxcivan Archaeological Project-University of Pennsylvania).

“We wondered how such a strong state as Urartu failed to occupy the city. Based on the result of the digs, it can be said for sure that this region was a center of a semi-independent ancient state which was fighting with Urartu“.

The Ancients residing in this territory have created a rich culture, constructed a grand palace with big columns, said another head of the expedition, professor of the Pennsylvania University Lauren Ristvit.   She said the joint US-Azerbaijani archaeological expedition has been holding studies in Sharur region since 2008 and intends to continue studies next year.

As noted in the website of The Naxcivan Archaeological Project-Unniversity of Pennsylvania:

We discovered fragments of several stone columns, perhaps suggesting that this is a large columned hall during the Achaemenid period. Three pottery sherds—inscribed with cuneiform—link the Middle Iron Age occupation of this citadel with fortresses at Bastam in Iranian Azerbaijan and Ayanis in Eastern Turkey

In 2009 the expedition team has also discovered a number of cuneiform inscriptions, without revealing their language. The territory after the collapse of Median dynasty in 550 BCE, became part of the Achaemenid dynasty (550-330 BCE) and therefore, the language of the discovered inscriptions could be Old-Persian.

Origins of the name of Nakchevan

The name Nakhjavan, possibly derived from the middle-Persian compound of ‘nakhchir+wan’ (‘tree quarry’, i.e. tree supplying ground), while some believe the name derived from Armenian meaning ‘the place of descent’, a Biblical reference to the descent of mythical Noah’s Ark on the adjacent Mount Ararat. The medieval geographers however referred to the area as Nashava.  Nakhjavan and present-day Republic of Azarbaijan, were parts of the Iranian province of Arran and other Iranian Khanates until 1828. The name of the former province of Arran and the Khanates was changed to the Republic of Azarbaijan in 1918.

Researchers engaged in explorations at the Nakhchevan site (picture source: The Naxcivan Archaeological Project-Unniversity of Pennsylvania).

Nakhchevan and the Pre-Islamic Era

The oldest material culture artefacts found in the region date back to the Neolithic Age. The region was part of the state of Mannae, and later Median dynasty of Iran.   After the collapse of Median dynasty in 550 BCE, it became part of the Satrapy of Armenia under the new dynasty, the Achaemenid Iran (550-330 BCE). After the invasion of Iran by Alexander II, the area along with the rest of Achaemenid Empire felt to the hands of the invaders, until the liberation of Iran by the third Iranian dynasty, the Arsacids/Parthian (248 BCE-224 CE).   Arsacids succeeded by the new dynasty, the Sasanians in 224 CE and subsequently the region remained part of Iran until the invasion of Iran by Arab-Muslins in 640 CE. In the 8th century,

The last of ancient Persia’s pre-Islamic dynasties, the Sassanian Empire (224-651 AD) at its maximum extent in the 620s AD.

Nakhchevan and the Post-Islamic Era

Nakhjavan was one of the scenes of Iranian uprising against the Arab invasion led by Persian revolutionary Babak Khorramdin (“those of the joyous religion” in Persian).   Nakhjavan from Arab rule in the 10th century went to the hands of Bagratuni King Smbat I and handed over to the princes of Syunik. This region also was taken by Sajids in 895 and between 909-929, Sallarid between 942-971 and Shaddadid between 971-1045. In the 11th century the region was taken over by the Saljuqs, a Persianised-Turkic dynasty in 1055, with their capital in the central Iranian city of Esfahan.   In 12th century, the city of Nakhjavan became the capital of the state of Atabegs, which included most of Azarbaijan Province of Iran and significant part of Arran province (nowadays the Republic of Azerbaijan).

The Armeno-Georgian princely house of Zacharids frequently raided the region when the Atabeg state was in decline in the early years of the 13th century. It was then plundered by invading Mongols and became part of the new Empire in 1236.   In the 16th century, the Safavid dynasty of Iran regaind the control of the area. Because of its geographic position, it frequently suffered during the wars between the Safavids and the Ottomans in the 16th to 18th centuries.   After the last Russo-Iranian War and the Treaty of Turkmenchay, the Nakhjavan khanate passed into Russian possession in 1828 and separated from Iran for the last time.

Map of Iran in 1805 before the invasions of Czarist Russia. Note the Caucasus (Nakhchevam Baku, Georgia, etc), north of Iran and along the eastern Caspian littoral, which was Iranian territory.  Russia invaded Iran and forced her to cede the Caucasus. Iran also lost important eastern territories such as Herat  which broke away with British support, Picture source from CAIS.