In what can be termed as a ground-breaking finding, two fossilised horse bones with cuneiform inscriptions have been discovered in China. What makes these finds remarkable is the fact one of these has been carved with elements of the Cyrus the Great Cylinder. These findings were report by London’s  Art Newspaper, Iran’s Tabnak News, and the London-based CAIS (Circle of Ancient Iranian Studies). The Cyrus Cylinder, dated to 539 BC and written in Akkadian cuneiform script, now in the British Museum. This is considered to be the world’s first Human Rights document, as recognized by the United Nations. The Cyrus Cylinder was first discovered  by Hormuz Rassam (Assyrian-British archaeologist) in the Esagila’s structures (Babylon’s primary temple) in 1879.

Cyrus the Great was the founder of the Achaemenid Empire and issued his proclamation in 539 BC, following his conquest of Babylon. The Cyrus Cylinder tabulated Cyrus the Great’s humanist policies:

(2) Repatriation of forcibly deported peoples to their original homelands

(3) Restoration of temples and places of worship

(4) Denouncement of the former ruler of Babylon, Nabonidus, as wicked, in contrast to Cyrus who is described as favoured by Marduk, the prime god of Babylon. Cyrus in fact, prostrated himself in front of Marduk when he peacefully entered Babylon city.

The Chinese bones were first believed to be fakes, as the probability of such finds showing up in China seemed…fantastic. This view has now been revised by Professor Irving Finkel of the British Museum (BM) who believes that these are indeed authentic.

In reality, knowledge of the Chinese bones is nothing new. The bones were originally presented by Xue Shenwei to Beijing’s Palace Museum (in the Forbidden City) as far back as 1983. The museum’s specialists told Xue that the script was indeed cuneiform and not ancient Chinese. Xue donated the bones to the Museum in 1985 and died the following year. Dr. Wu Yuhong of the museum discovered in 1987 that the cuneiform inscription of first bone was indeed from the Cyrus Cylinder – the script on the second one was not identified. 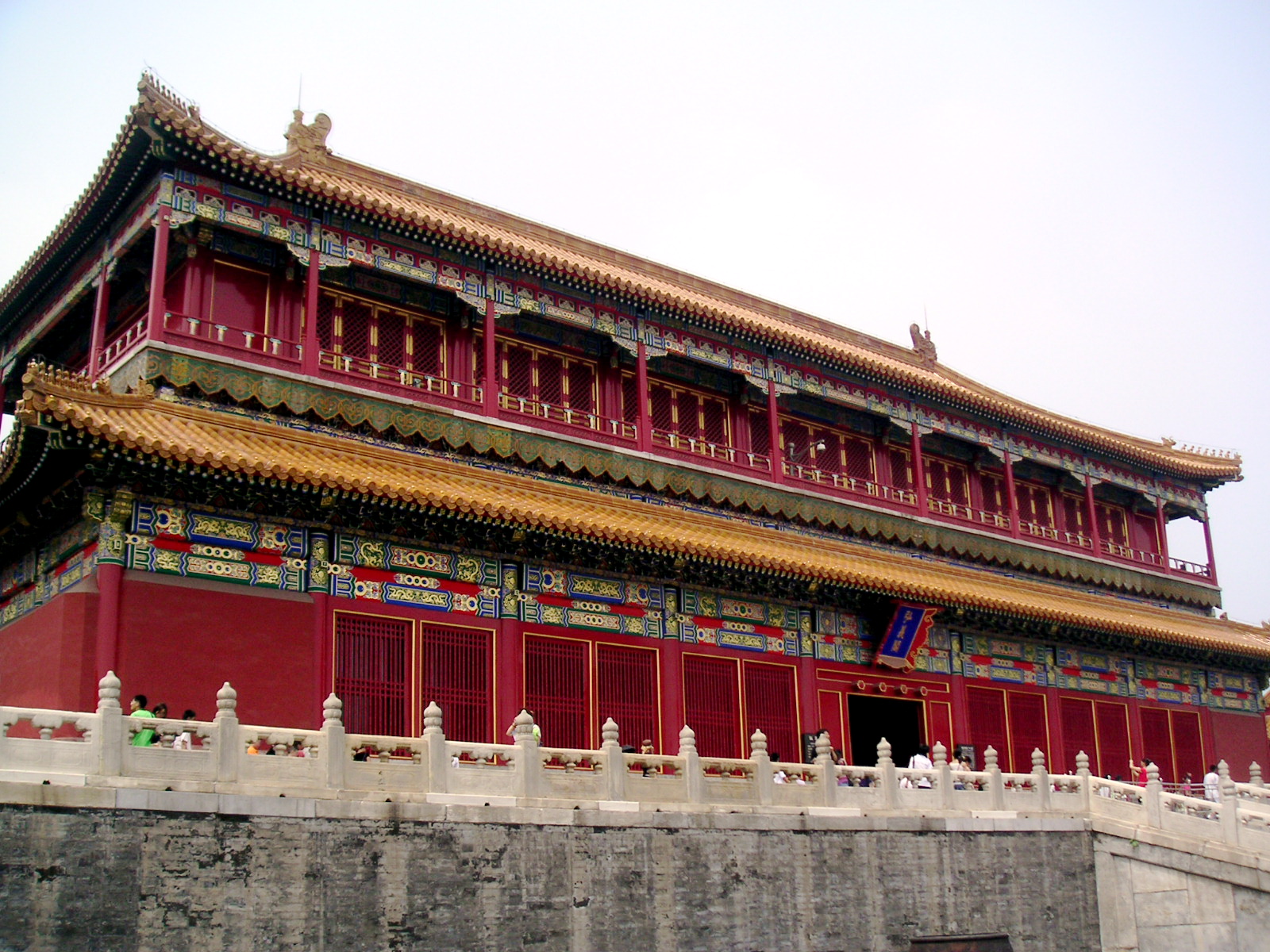 A view of the Palace Museum-Forbidden City, in Beijing. The bones with the Cyrus inscriptions were first presented by Xue Shenwei to the Palace Museum’s specialists in as 1983. It has taken decades for these discoveries to surface in mainstream Western and Iranian historiography.

It was in January 2010 when Professor Finkel examined the available photographs from the two Chinese bones, to check to see if these were authentic. Finkel concluded that these were indeed authentic and also discovered that the second bone had cuneiform inscriptions from the Cyrus cylinder. Recall that the Chinese Museum had not discovered this in 1987. Professor Finkel then contacted his Chinese counterparts for more information. 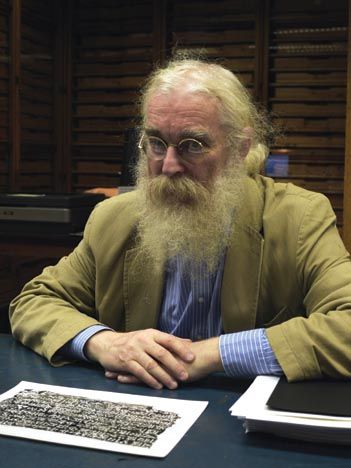 Professor Finkel of the British Museum supports the authenticity of the Chinese bones bearing cuneiform inscriptions that parallel the Cyrus Cylinder.

Dr. Yushu Gong, Chinese Assyriologist, closely examined the bones in the Museum. He carefully rubbed black wax on paper upon the inscription for recording purposes. This provides a clearer image of the script than that currently seen in available photographs. Dr. Yushu then bought these to the British Museum in London and provided a workshop on June 23-24, 2010. The findings were generally received positively but there was also lingering scepticism among some experts in the audience.

Professor Finkel, who finds the evidence “completely compelling” has discovered that:

(1) The texts have fewer than one in every 20 of the Cyrus text’s cuneiform signs transcribed, but they are in the correct order.

(2) The Chinese version of the cuneiform is linguistically correct but its “style” of writing is slightly different from the original cuneiform. Finkel has noted that the signs’ wedge-like strokes from the Babylonian version but are similar to the ones used by writers in ancient Iran.

“The text used by the copier on the bones was not the Cyrus Cylinder, but another version, probably originally written in Persia, rather than Babylon…”

Finkel further avers that the Persian version may have been:

(1) Written on leather with ink

(2) Inscribed on a tablet of clay

Nevertheless, Dr. Kamyar Abdi, an Iranian archaeologist, has urged caution and more studies before arriving at any definitive conclusions. Dr. Abdi told the Persian service of CHN that:

“We should wait patiently for in-depth studies by experts on ancient languages and other laboratory research to confirm the genuineness of the objects…If the objects are proven authentic, the discovery will begin to transform our knowledge about relations between the Near East, especially the Achaemenid Dynastic Empire (550-330 BCE), and China during the first millennium, in particular during the Eastern Zhou Dynasty (770-221 BC)… The Cyrus Cylinder had undoubtedly been important for the people living under the Achaemenid Empire, but, if the objects are proved authentic, the first question would be how the Cyrus the Great’ text had been transferred to China and why the text was important enough for the Chinese to copy it.”

For further information on this perspective consult Payvand news of Iran. Iranian archaeologist Dr. Kamyar Abdi at Fullerton in 2006. Dr. Abdi, editor of the Iranian journal of Archaeology and History, has also looked at the Chinese finds with interest but urges further study by a wider panel of experts. He has affirmed that, should the findings be proven unanimously authentic, then an entire chapter of history would need to be revisited.

Shapur Suren Pahlav of CAIS notes that there are four reasons militating against the possibility of the Chinese finds being forgeries.

First of all a charlatan would have to find fossilized horse bones, which has never before been used in fake artefacts.

Second, the aforementioned Xue Shenwei, who was a traditional Chinese doctor,mentioned that he had known of the bones as far back as 1928. He purchased the first bone in 1935 and the second one five years later in 1940. Xue, who knew the sellers, purchased the bones thinking that they were written in an unknown ancient script, presumably from China. It is very fortunate that Xue hid these from the authorities in 1966, during Mao-ist China’s “Cultural Revolution”. Chinese academics who have investigated the late Xue’s account have verified it as genuine.

Recall that Xue had acquired the bones in 1935 and 1940. How could a Chinese forger have known of the contents of the Cyrus Cylinder at that time? Knowledge of this artefact only became known from the early 1970s

The third problem is why would a Charlatan only carve one in twenty characters? This would identification of the supposed “forgery” even more difficult.

Fourth, what would be the purpose of the Charlatan selling the bones in China where no lucrative market for such items would have existed at the time?

Why are these findings so Significant?

This discovery is of profound significance.  The common assumption by mainstream historiography has been that the Cyrus Cylinder was:

(2) Not widely spread beyond Babylon where it was inscribed

But both of these assumptions are now challenged. In fact, these findings are strongly suggestive that the contents of the Cyrus Cylinder:

(1) Were not simply “ceremonial”

(2) Were widely disseminated and copied, far beyond the borders of the Achaemenid Empire. Most likely the Chinese bones were based on documents that arrived in China during or shortly after the reign of Cyrus the Great. Note that Professor Finkel supports the notion that the bones were copied from an original source from ancient Iran, but it remains unclear as to when the actual copying was done.

These findings certainly push back the known history of Sino-Persian relations to the Achaemenid era. This means that Chinese-Iranian relations go back much earlier than has been generally believed.

Interestingly, these highly significant findings have not been widely publicized in the mainstream media or historiography.