A reconstruction of the late Sassanians at Shiz (Takht e Suleiman in Azarbaijan, northwest Iran) by Kaveh Farrokh (painting by the late Angus Mcbride) in Elite Sassanian Cavalry. To the left rides a chief Mobed (a top-ranking Zoroastrian priest or Magus), General Shahrbaraz (lit. “Boar of the realm”) is situated in the center and Queen Boran (Poorandokht) leads to the right.

Some authors place her reign at one year and four months, others at one year and six months; Sebēos (p. 28, tr. p. 90) puts it at two years. In fact, Bōrān probably died in the autumn of 631 (cf. Nöldeke, Geschichte der Perser, p. 433), in the third calendar year of a reign that cannot have exceeded a year and a half. According to the Anonymous Syriac Chronicle (loc. cit.) and the Chronicle of Seert (II/2, p. 259), she was strangled. The Chronicle of Seert gives the name of her murderer as Pērōz, general of the Persian army. 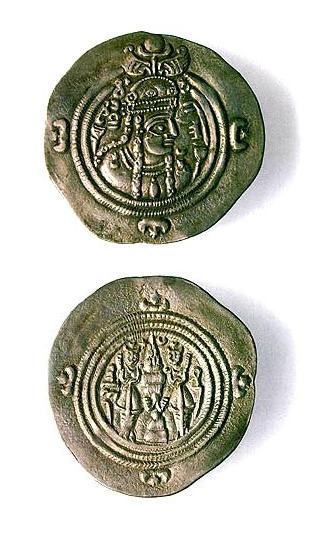 Late Sassanian coin depicting a portrait of Queen Boran (also Poorandokht or Pooran). Note Zoroastrian symbols at back of coin.

According to Tabarī (I, p. 1064; Nöldeke, pp. 390ff.), she elevated Fosfarrūkh, the author of the plot against Šahrvarāz, to the post of vizier (i.e. wuzurg-framadār). According to a different tradition, she is supposed to have put Farroḵ-Hormozd, Prince of Ādurbādagān, in charge of the government (Sebēos, loc. cit.). The major event of her reign was the dispatch of an embassy to Emperor Heraclius, led by the catholicos Išo’yab III and other dignitaries of the Persian church (Anonymous Syriac Chronicle, loc. cit.; Chronicle of Seert II/2, p. 237). This mission had as its purpose to resolve several matters at issue between the two powers: In particular, it is supposed to have resulted in the restoration of the True Cross to Heraclius; in fact, the cross had already been restored by Kavād II in 629 (cf. Nöldeke, p. 392 n. 1).