There reports perpetuate a number of misconceptions with respect to Iranian Azarbaijan, the Republic of Azarbaijan (which did not historically exist until 1918) and the “language” issue in Iran.

Historically speaking, there was no “Azarbaijan” north of the Araxes River as these were a collection of Khanates subject the authority of Iran with the real historical Azarbaijan being a province in Iran’s northwest since antiquity. 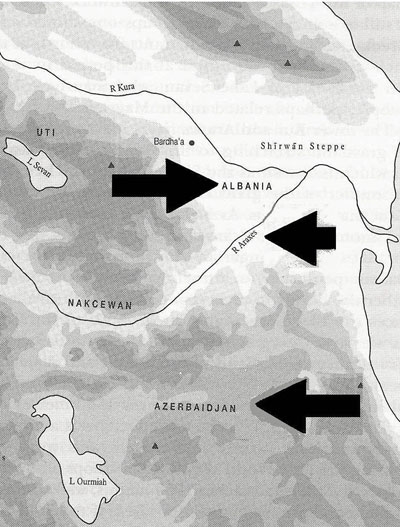 Note how the Araxes River separates Arran/Albania (modern Republic of Azarbaijan) from the historical Azerbaijan in Iran. For more information consult Whittow, Mark, The Making of Byzantium: 600-1025, Berkley: University of California Press.

Russia invaded Iran and forced her to relinquish much of her Caucasian territories in the early 19th century. Map of Iran in 1805 before the invasions of Czarist Russia. Note the Caucasus, north of Iran and along the eastern Caspian littoral, which was Iranian territory. There was no independent kingdom named “Azerbaijan”  which was supposedly “divided” between iran and Russia. Russia invaded Iran and forced her to cede the Caucasus.   iran also lost important eastern territories such as Herat  which broke away with British support, Picture source from CAIS.

Note a British 1909 Map which again notes how the real historical Azarbaijan existed only in Iran’s northwest: Map of Iran, the eastern marches of the former Ottoman Empire and the Caucasus. Note that the term “Azarbaijan” applies to Iran’s northwest province known as “Azarbaijan”. No such  name is used to designate those territories to the north of the Araxes River.

Ottoman maps of 1912 (just before World War One) also make clear that the historical Azarbaijan existed only in Iran’s northwest (below the Araxes River): Map of the Ottoman Empire, western and northwestern Iran and the Caucasus drafted in 1912 by the Ottoman Turks in 1912. Note that the term “Azarbaijan” is only applied to Iran’s northwest, which is a province with that name. The name was not applied to the territories to the north of the Araxes River.

The BBC report was responded to by Shervin Majlesi who sent the protest below to the news outlet:

Your story entitled “Azeris feel Iranian pressure” wrongly states “
[m]ore than 20 million Azeris live [in Iran] and have done since the territory was annexed under the Shah after a settlement with the Russian and, subsequently, Soviet leaders.”

To state that Iranian part of Azerbaijan was annexed to Iran under the Shah is factually wrong and, at best, reflects a perplexing level of ignorance of history. It was in fact the Russian Empire which annexed parts of Azerbaijan and Caucasus after the Russo-Persian Wars of the 18th Century. And the Soviet Union, after WWII, used the opportunity of its military presence (occupation) in the Iranian Azerbaijan to create an autonomous, Soviet-supported state in 1946 which was dissolved during the same year.

To give only a few instances of Azerbaijan’s particular integration and vital role in Iranian cultural and political life I can point out to examples in more recent times: the Safavid Dynasty (15th to 17th centuries A.D.) rose to power in Azerbaijan and Tabriz was, for a number of years, the capital of Iran (Persia) under that dynasty; heir apparents under Qajar Dynasty were based in Tabriz (Azerbaijan) until they ascended to the throne and were often fluent in Azeri; and throughout Iranian history (before, during and after the Shah) major political figures, including several Prime Ministers, were Azeris.

When writing about sensitive subjects related to ethnic tensions in an already volatile region a much higher level of professional journalism is expected from BBC. While treatment of minorities (especially under the current Iranian regime) is an extremely important issue which deserves public scrutiny and debate, a poorly researched article, which omits very important facts and misrepresents others, can only lead to misleading conclusions and will call into question BBC’s impartiality.

I sincerely hope that you will take appropriate action to apologize to your readers and inform them of the factual inaccuracy of this article.

Kaveh Farrokh had raised concerns as far back as 2005, regarding intentions by certain groups to create a false issue with respect to Iranian Azarbaijan – below is his on-line book against pan-Turanism:

See especially the role of western powers in Chapter Six:

There is also a large link posted against pan-Turkism:

It is also important to cite the observations made by Dr. Terry Graham, a sage researcher of Iranian Studies for decades. Here are his observations:

1) Azerbaijan is in many ways the quintessential Iran. It was the birth region of Zoroaster, the Prophet of the Mazdean religion, the native religion of Iran. He was born either in Tabriz or Urumiyeh, as the records indicate.

2) Azerbaijan is Turkish on in language and not even totally from that point of view. Up to the 15th century only the Azeri dialect of Persian was spoken there. The Turkification of the language took place over the course of the 15th century. The process went hand to hand with the Shi’ification of the region. Up to then Azerbaijan was 100 percent Sunni and mostly Sufi. Sheikh Safiyod-Din Ardabili was a Sunni of the Shafi’ite school. When the Shi’ite Turks fled Anatolia because of the Ottoman policy of declaring itself the Third Caliphate and therefore being more ‘Catholic than the Pope’ (kâse dâghtar az âsh), a mass persecution of Shi’ites took place, causing them to flee in large numbers to Azerbaijan.

3) Ethnically the region, whether north of the Aras or south, is mixed. It is not 100 percent Turkic-speaking. There is a substantial Tati population in the south and even more in the north. In the south the Tats in inhabit the Dasht-e Moghân and the villages around Khalkhâl. In addition, although it was attached to Gilan for administrative reasons under the Pahlavis, the Talesh region not only continues to speak ‘Tati’, which is the old Guyesh-e Azari, the old Azeri dialect, but the Talesh people continue to wear the traditional Azeri costume.

4) The Tats, or original Azeris, are all Shafi’ite Sunni, like the Kurds, and, also like the Kurds, continue the pre-Shi’ite or pre-Safavid tradition of adhering to one of the two major Sufi orders: the Qaderi or the Naqshbandi. (In pre-Safavid times the Khalvati was also important, though now extinct in Azerbaijan.)

5) The Tats in northern Azerbaijan, the ex-Soviet Republic, are lobbying to separate themselves from their Turkic-speaking neighbors and join Iran!

6) Pan-Turkism is a completely irrelevant and ludicrous movement. The Azeris are no more Turks than the rest of the Iranians. They just happen to speak a very Persianised dialect of Turkic. Every Iranian, apart from minorities like the Lors and the Bakhtiari and the Baluchis, etc., has a mixture of Persian, Turkish and Arabic blood. Iranians are a mixed race, an irony given the pre-Islamic, Sasanian Aryan racism (!), and the Tabrizis are no different from the Mashhadis (temperamentally more ‘Tork’ than the Tabrizis some say!) or the Esfahanis (whose own dialect is ‘Turkified’, as the palatal ‘k’ and ‘g’ indicate, or the Shirazis with their Qashqai Turkic-speaking element or the Kermanis with their Afshar-Bottaghchi Turkic-speaking element, or Iranians anywhere else.

7) Northern Azerbaijan was part of Iran, like Uzbekistan, Turkmenistan and Tajikistan, until the Treaties of Torkeman-chai and Golestan in the early 19th century. Fath Ali Shah is directly responsible for the loss of half of Iran because of his lascivious ways. His son, the crown prince, Abbâs Mirzâ, the greatest of all the Qajars, died of apoplexy when his failed to send the cannonry and other weaponry called for by AM, who was leading the Iranian troops against the Russians.

8) None of the great names of pre-modern Iran were Turkic-speakers except the poet Nasimi, who was an ideologue of the Horufi movement and, like Shahriyar today, composed both Persian and Turkish divans. All the others were purely Persian-speakers, living before the Turkification of the language. Poets like Mahasti (Mahsati some say), Qotrân Tabrizi, Nezami Ganjavi and Khaqani all spoke only Persian and wrote only in Persian. The same holds for all the Sufi masters and poets from the region. As poets, Maghrebi, Shabestari and Shah Qasem Anvar, and Maghrebi and Shah Qasem (who was Shah Ne’matollah’s ‘Mr. Niktab’ in Herat, the Iranian capital at the time) even wrote some poems in the local Azeri Persian dialect of the time, a dialect close to Gilaki. (In fact, in the Safvat-e safâ, the biography of Sheykh Safi Ardabili, conversations between him and his master Sheykh Zahed Gilani, are quoted in their mutual dialect (âmyâne-ye azari-gilaki).)

9) As for Sufi masters – all of whom were Shafi’ite Sunni – we have Shams Tabrizi, Sheykh Safi himself, Kamal Khojandi (who migrated to Tabriz from Khojand in what is now Tajikistan) and many lesser known figures, such as Akhi Faraj Zanjani and Sejasi, one of Shams’s masters, from the village of Sejas near Zanjan.

Recent stories on the Azarbaijan topic by the BBC: