Dr. Manouchehr Moshtagh Khorasani, the world’s leading expert on the history of Iranian and Oriental arms. armour, firearms and traditional Iranian martial arts.See for example Dr. Khorasani’s lecture at M.I.T. on Iranian arms and armor from the Bronze age to the Qajar era. For more information on Dr. Khorasani’s works, consult his list of publications.

Note that Dr. Khorasani is the only person to have obtained two awards of academic merit in the field of Iranian Studies – he won the Book the Year Award in 2009 and well as the Book of the year Award in 2012. Dr. Khorasani’s first book (recipient of the 2009 award), Arms & Armor from Iran: The Bronze Age to the End of the Qajar Period is also unique in that it is the first textbook of its kind to provide an exhaustive and detailed compendium on the history, development, description and analysis of Iranian arms and armor from the bronze age to the Qajar era.

Dt. Khorasani “Lexicon of Atms and Armor from Iran (which won the 2012 award) is the first academic book ever to be written on the lexicon and terminology of Iranian arms and warfare. 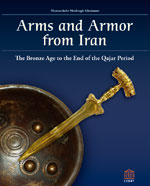 The pictures seen below will appear in Dr Khorasani’s upcoming text:  “Persian Archery and Swordsmanship: Traditional Martial Arts of Iran” . [Click to Enlarge]  Razmafzar, Dr. Khorasani’s project of reviving Persian/Iranian martial arts and swordsmanship is going very well. Now he has also our constitution (asasnameh) defining all steps and levels with names and techniques

[Click to Enlarge]Razmafzar: A Persian Fighting Art based on Persian manuscripts